Length of Fingers Can Predict Your Math and Verbal Skills...

In the finger length / SAT exam scores study, researchers at England’s University of Bath measured the ring and index finger of children and then compared them to their SAT scores in the math and verbal sections.

And there was a very significant correlation: the kids whose index fingers were longer than their ring fingers had performed better on the verbal section, while those whose ring finger was longer did better on the math section.

Scientists have known that the amount of the testosterone and estrogen hormones a fetus receives in the womb impacts finger lengths and cognitive skills. Testosterone lengthens ring fingers and is associated with greater math and spatial functions, while estrogen lengthens index fingers and is associated with greater verbal skills.

So it would seem a rational conclusion that, if you consider yourself more mathematically or verbally inclined, you’ll see a correlation in your own finger lengths.
It would seem an irrational conclusion, but nice wishful thinking, that if you want to improve your math or verbal skills you pull for a while on the appropriate finger … but who knows, give them a tug and see.
Finally, try this, too: email this article to your family and friends and ask them whether they consider themselves more of a “math” or “words” person, and if they see the proper correlation in their ring versus index finger. 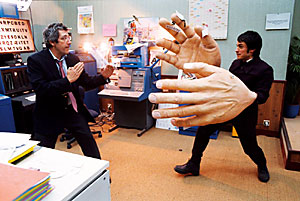 The longer ring finger would indicate this fellow has a particular aptitude for math.

SAYASUKA
Posted by Ina Idin at 8:00 AM