Fort Supai is located at Kuala Linggi, Melaka - a place which I've never heard before, not until I came accross a blog which suggested that the food was so nice that he wanted to gobble up the empty plates as well?? And that his parents are frequenting this place all the way from KL on monthly basis?? And the sunset is breathtakingly awesome?? Tempting as it sounds "why not we go there and have a look?" l suggested to Idin and my brothers when we were lepaking at Port Dickson few months back.
It's about half an hour drive from Bayu Beach Resort (of course depending on the traffics and driving speed ;). Just go straight as if you're going to 'Melaka' after reaching Teluk Kemang until you reach T junction which indicates Tanjung Agas on the right hand side - of course you then need to turn right which not long after that you'll reach a long bridge on top of Sungai Linggi a border between Negeri Sembilan and Melaka. Tadaaa.. Now you're already in Melaka. Watch out for RTC signboard after the bridge, I think the first right turn after the bridge and here you go, Fort Supai is ever ready to greet you hehehehe..
After turning right, go straight until you see the floating restaurant at the end of the road - jalan mati la...
If you're a fan of seeing the sun going to 'sleep' then you can plan your timing and make sure you go to the floating restaurant and climb the fort to enjoy beautiful sunset ( I missed this coz by the time I reached on top of the fort 3/4 of the sun already disappeared:( - too busy taking pictures hahhaha)
There're 2 separate surau for muslims man/woman to pray so there's no trouble spending sometime there to enjoy the sunset and perform the Maghrib solat.
NOW..food part.. The main dishes are of course seafood which you can choose on your own - eg maybe you want 5 ekor of shrimps only? And the taste..suffice for me to say that it would not make me want to eat the plate larr but note this : taste + reasonable price + floating ambience + windy sea breeze + sunset view = superb dinner and I would love to come here again and again. So its tagline "rasa sekali pasti datang lagi" has been proven, for me and Idin, for that wanting to eat the plate-blogger's parents and for many others who enjoy the above equation. Wow! I'm not paid to promote them?? but sayyasuka Fort Supai hehehe..
Below info to note: 2 black peppered big crabs, 1 big squid + 10 prawns (fried with special flour) + 20++ chilli fried kupang + 1 pc grilled pari + 2 plates of rice + watermelon & orange juice + hot coffee = RM 77.50

*though all the food pictures look dark but the taste makes your smile brighter :D 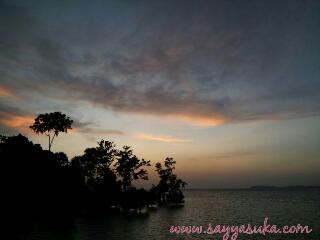 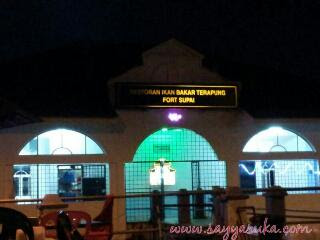 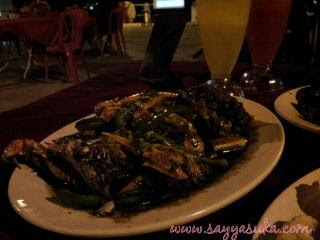 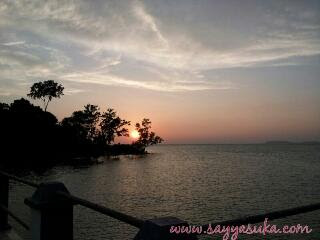 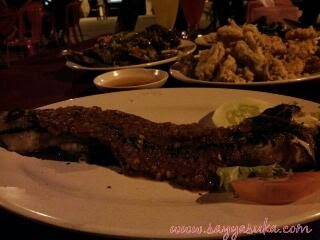 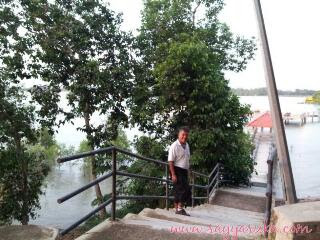 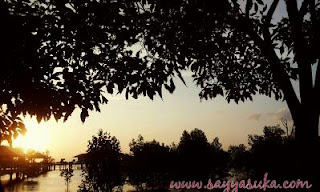 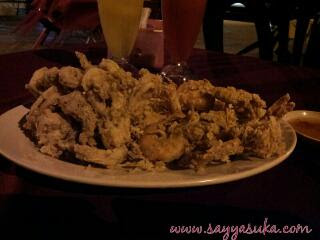 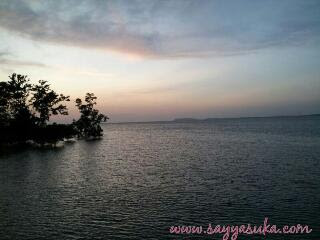 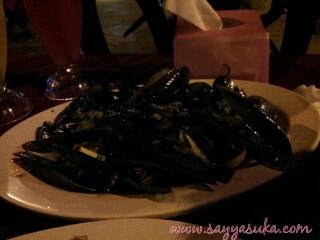