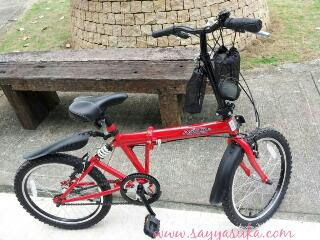 
I wrote about folding bike (here) almost a year ago  and never stopped dreaming to own one since then. Nothing syok about it, not as syok as owning a BMW like many of my peers have but it just reminds me of my primary school days - that time I owned not a second hand but may be sixth or seventh hand bicycle which can be unscrewed (literally yes, because there were 2 giant screws at the handle & middle part) into three parts which to the envy of my kampung friends hehehe. It was made in Germany and blue in colour. However there was no purpose of unscrewing the bike as it was not meant to be transported anywhere except for a ride to school!
Now few decades (waaa.. So old already ka?) later I got a brand new folding bike - thanks to Idin. Foldable and transportable;o)

So I can ride around Tasik Permaisuri or Lake Garden (here) remembering those old days... 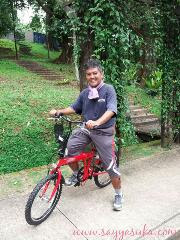 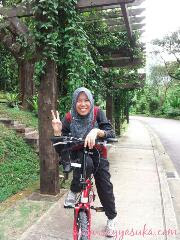